I am beyond thankful that Google Drive exists. Thanks to this marvellous piece of technology, and the need to send some large files and power points to friends, I didn’t lose all my resources in USB gate, January 2017. As I was rummaging through everything to see what I could salvage, I was relieved when my summer camp 2016 resources had survived – I’d gone hunting them down for the purpose of this very blog, and now I can share them with you!

WE are, of course, many months from summer, but I shall be adding them in here now, before I forget. Nor will these be the last camp ideas that make their way onto this blog before summer hits! I’ve already got summer 2017 plotting underway and hopefully it will make it onto the blog well before the summer vacation hits us!

BUT back to today’s post. Today I’m going to share with you the two camps I did last summer. I had two ideas and couldn’t decide between them, so asked if I could run both! The school agreed and I ended up running two camps in the same week: Comic Book/Superhero Camp in the morning and Pop Music Camp in the afternoon. They were split by level in that the Pop Music Camp was open to higher ability 5th/6th grade and the Comic Book Camp was open to anyone who wanted to join from 3rd though 6th grade.

I have not always had budgets for camps, and though I do actually have some wonga to play with these days, I still find I use paper as my basis for all things! I like my students to have complete freedom with their creativity and try and keep the boundaries for that limited. As a result you’ll see that a lot of the following is paper based – each student got a little pack for the camp! I’ll explain some more below and leave the links at the end!!

I’LL go through the camp outlines and throw some photos in down below!

TUESDAY: Tintin: Guess the dialogue, See the original, watch an episode (search the internet for Tintin episodes. I used the Cigar’s of the pharaoh’s. There were no subtitles, but it was obvious enough.) Day 2 of comic.

THURSDAY: Day dedicated to finishing their comic and finishing activities.

THE badges, cover colouring page and Thor “guess the dialogue” were fillers.

Lucy in the Sky with Diamonds activity.

FRIDAY: This Time For Africa – Shakira (English and Spanish versions) / Dream A Little Dream Of Me – Mama Cass

FOR each song we listened to it and/or watched the music video, discussed genre and what they thought of the song, and then we looked at the lyrics in detail. For the remainder of the first hour they did vocab work from the lyrics. The second hour was a craft or activity.

THE ultimate end game of the Comic Book Camp was for students to make their own comic – about any character, topic etc. they liked! I provided speech bubbles and action words and we worked on this throughout the week.

AND then came the Pop Music Camp.

THESE camps were a turning point for me – I’d finally managed to tap into the students likes and dislikes in a way that worked for them! By the end of the Comic Book Camp, one of my students had gone from being disruptive and obnoxious, to completing the work as best he could. In his case this was simply filling each speech bubble with one word, but each of those words were English and he was rightly proud of himself!

A further source of pride, for me, was the Lucy in the sky with diamonds activity. Whilst planning the camp I was reminded of primary school and the day my headmaster brought in his Seargent Pepper’s Lonely Hearts Club Band vinyl record. I remember holding it and studying the cover, and then he played Lucy in the sky with diamonds. He put it on repeat and then asked us to draw a picture using the song as our inspiration. It dawned on me as I put this into my camp that here was education coming full circle. To this day, the teachers I had in that tiny village primary school in the Cumbrian countryside are responsible for so much more than I realised. The activity was a complete hit! The only difference being that I we read through the lyrics and gave the students a copy.

TO round off the music camp, I decided it was time to introduce a past-time from days-gone-by: the mixtape. I searched for a way of doing this and I stumbled upon this box template on etsy. I urge you all to check out the SimplyEverydayMe shop on etsy, there are some great paper crafts in there! I made an insert template of my own, and hey presto! Mixtape’s all around! 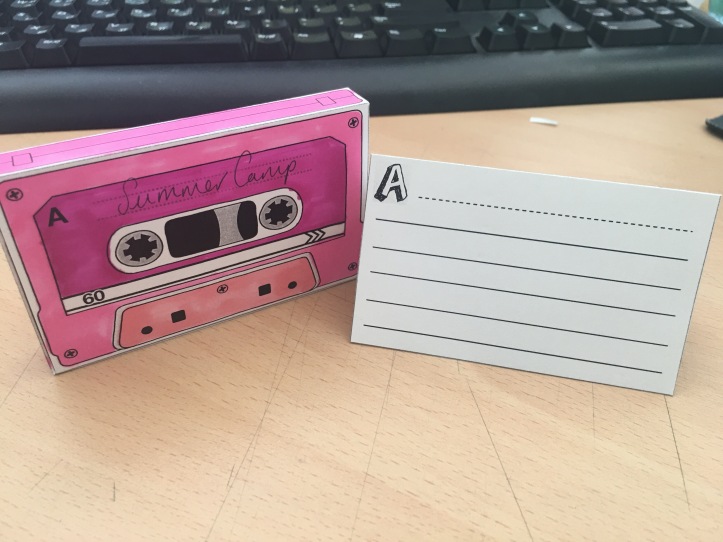 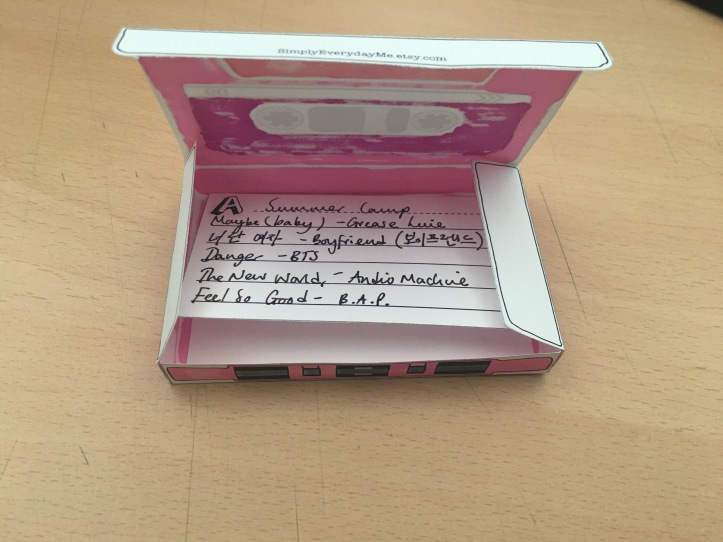 NOW you’ve read through all of this smush, the documents, PPTs, music videos and relevant font files are all in the google drive links below!