I didn’t think I’d end up doing a post on a single book here, but having just finished A Man Lies Dreaming, I can tell you that it deserves nothing less.

If you haven’t read this book, I suggest you head away now, there are spoilers ahead!

I bought Lavie Tidhar’s A Man Lies Dreaming on a whim after browsing Book Depository. All I read was the blurb, and somehow I also managed to avoid the snippets of reviews that are dotted around the cover. I was not prepared for this book in the slightest. It is haunting, it is uncomfortable and it is heartbreaking. It is, at times, painful to read. It’s enthralling.

Deep in the heart of history’s most infamous concentraion camp, a man lies dreaming. His name is Shomer, and before the war he was a pulp fiction author. Now, to escape the brutal reality of life in Aushwitz, Shomer spens his nights imagining another world – a world where a disgraced former dictator known only as Wolf ekes out a miserable existence as a low-rent PI in London’s grimiest streets.

An extraordinary story of revenge and redemption, A Man Lies Dreaming is an unforgettable testement to the power of imagination.

This is a book of two halves, both litterally and metaphorically. We open with Wolf, disenchanted and cold in a London that is balanced on the edge of something terrible. This certainly adds to the difficulty of the book. To begin with, the subject matter is harrowing, but the London Tidhar has written here seems awfully plausible in the reality we’re currently living through!

Initially, the seperation between Wolf and Shomer is clear. Their stories are divided and their paths are clear. Indeed, Wolf’s identity is clear from the outset even though his name is only explicitly mentioned in one single scene throughout the whole book. This was incredible writing by Tidhar, and I believe necessary. It humanised Wolf in a way that would have otherwise been impossible.

In the second half of the book, the lines become increasingly more blurred as both men’s lives appear to be spiraling into an abyss of lost meaning. The pace build and builds right to the end, leading to all sorts of confusions in the last few pages and, ultimately, one last haunting line.

Tidhar has woven a poweful story of imagination, and brought it down to the base levels of humanity. The punishments Shomer eeks out in his mind to those who have encarcerated him are brutal and make for some seriously infomfortable reading, but equally, you cannot fault this. Tidhar makes the reader question everything, including themselves, as the bondaries between Wolf and Shomer blur until they might as well be the same person.

Tidhar uses his subject matter to plumb into the darkets places of the human psyche and makes no apologies along they way.

Upon finishing this book, I felt raw. For the first time in my life I finished a book and cried. The only other time a book has brought me to tears is when Beth dies in Little Women.

I have tried to put how A Man Lies Dreaming made me feel into words, and I’m not going to try any further. I simply urge you to read for yourself. Prepare yourself, it’s a rocky read, but it’s worth it. 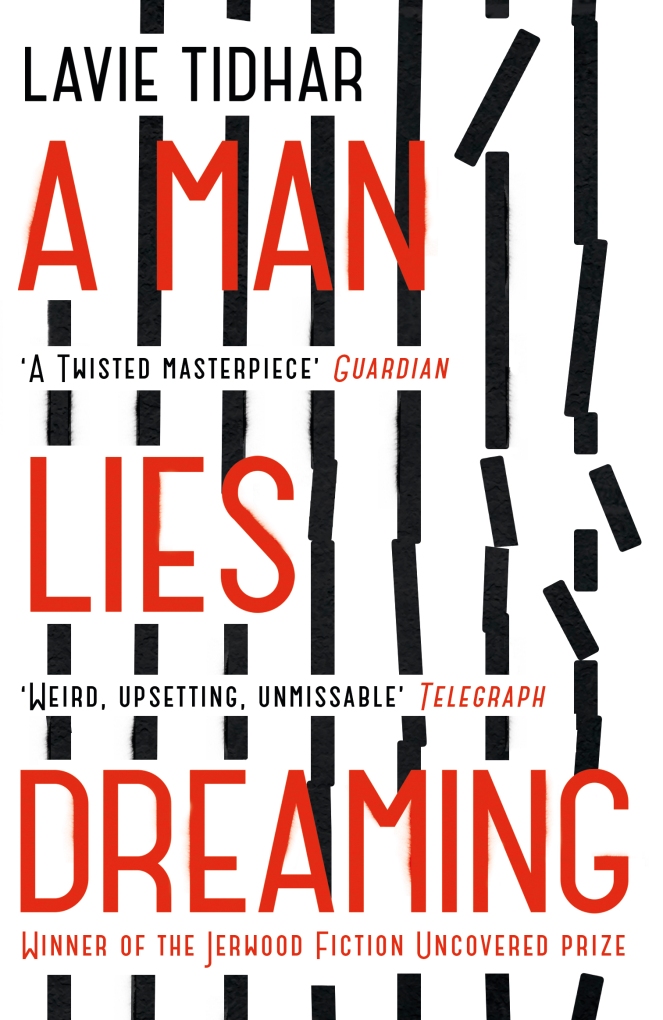